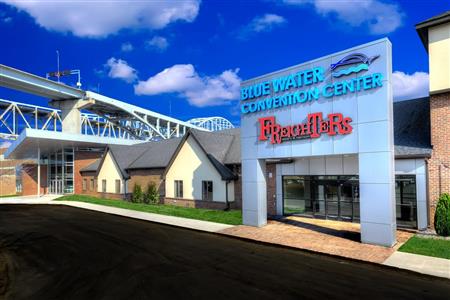 A new sign is ready to greet visitors of the Blue Water Convention Center.

It's one of the final touches needed to complete the $9 million center along the St. Clair River.

Phillips Signs and Lighting of Harrison Township began installing the $10,300 sign Monday. The 22-by-4.5 foot LED-lighted sign is above the Freighters Eatery and Taproom sign at the north entrance.

The LED sign has two shades of blue for the lettering. It includes a graphic representing the Blue Water Bridge and the St. Clair River.

"It doesn't draw much energy and lasts a long time," Steve Beauvais, sign technician for Phillips Signs, said. "There is not too much maintenance other than cleaning it."

Interior signage of the convention center has been ordered, said Jenny Posey, a county administrative analyst.

She said a grand opening date has not been set but should be in mid-April.

Officials had expected an earlier opening, but Posey said a lot of the final details still need to be wrapped up.

"I wouldn't call them setbacks, but the interior signage didn't come in as quickly as we had hoped," Posey said. "We are trying to get the rest of the punch list items completed before we set a date."

Three events are already booked for the center, starting in May.

Full write up in The Time Herald of Port Huron